HOW SWEET THE WORDS

INTRO.:  A song which declares how God’s words should be sweet unto our taste is “How Sweet the Words.”  The text was written by Harry Presley, who was born on Thanksgiving Day, Nov. 27, 1924, near Stilwell, OK, in the home of his parents John M. and Inez Richardson Presley. Growing up in the Stilwell area, he received his schooling from the Stilwell public schools and graduated from high school in 1942. Following his baptism into Christ on Sept. 17, 1950, he served in the U. S. Army in Korea during the Korean War. After his return, he began preaching the gospel in 1956, doing fill-in work for local congregations. On Dec. 17, 1961, he started preaching full-time for the Four Corners church of Christ, five miles east of Stilwell on Hwy. 100.  In addition, Presley has written three commentaries on books of the Bible: Zechariah, Revelation, and Romans; and has produced over 1,000 poems. Through the years, much of his poetry has been published in the Gospel Light out of Delight, AR.

Some of Presley’s poems have also been published as hymns.  “How Sweet the Words” was published in the March, 1975, issue of With All Boldness, a paper edited by Brent Lewis. The tune was composed by R. J. Stevens (1927-2012). Stevens told me in a note, “Harry sent me some religious poetry nearly thirty-five to forty years ago. He lived in a small town in Oklahoma and preached for the church in that community. I never met him and I haven’t been in touch with him since then. As you know, I put some of his poems to music.”   Later, Presley wrote in a letter to me, “I never knew R. J. Stevens, but I have corresponded with him several times in the past by mail.  I have lost track of him though and don’t know where he is now.  I sent him a package of songs similar to this one several years ago, but I never heard from him.”   Presley-Stevens collaborations published in the 1986 Hymns for Worship edited by Stevens and Dane K. Shepard are “I Need Thee Ever Near Me,” “Immortally Arrayed,” “Let Him Make Your Heart His Own” (original edition only), “My Home Above,.” and “O Lord, We Give Our Hearts.”

Presley continued his full-time preaching work until Dec. 31, 1986, when health problems forced him to retire, but he has continued to be an active member of the Four Corners congregation, teaching the adult Bible class and leading singing. Ninety of his poems were published by Leon Brashear, former preacher at Four Corners, in a book entitled Treasures of the Heart in 1988. Rick Ritter, current preacher at Four Corners, published 105 of Presley’s poems in 2010 in a book entitled Blessed Assurance. Harry sent me a copy of the latter. It is available along with many other of his poems through the website of the Braggs, OK, church of Christ where Brashear now preaches. Those who like devotional religious poetry should enjoy this book, which is plastic-comb spiral bound. Presley also provided both words and music for over 200 other hymns, such as “Be the “Pilot of My Soul” (1973), “When Jesus Leads Me Through Heaven’s Gate” (1979), “My Lord Will Take Care of Me” (1988), “Heaven’s Fountain of Love” (1993), “That Eternal Jubilee” (1994), and “My Soul Is in My Savior’s Hand” (2007). He says, “I never went to college, or had a formal music education. All I know about music is what I have taught myself from rudiment books.”

“How Sweet the Words” explains why the word of God is sweeter than honey.

I. Stanza 1 reminds us that it provides great blessings

How sweet the words that fill my ears,

Unchanged throughout the passing years,

Replete with every blessing.

II. Stanza 2 points out that it is God’s revelation of His power to salvation

Such love that man may now behold

The tide of life forever flows

Within the holy pages;

More precious through the ages.

CONCL.:  The chorus shows that God’s words tell of His grace that we might look upon His face through them.

They tell of God’s unceasing grace

To every Christian duty;

By faith we look upon His face

Within their sacred beauty.

As we consider all the benefits that come to us from God’s message revealed by His Son through the Holy Spirit to inspired writers in the Scriptures, we’re moved to exclaim, “How Sweet the Words”! 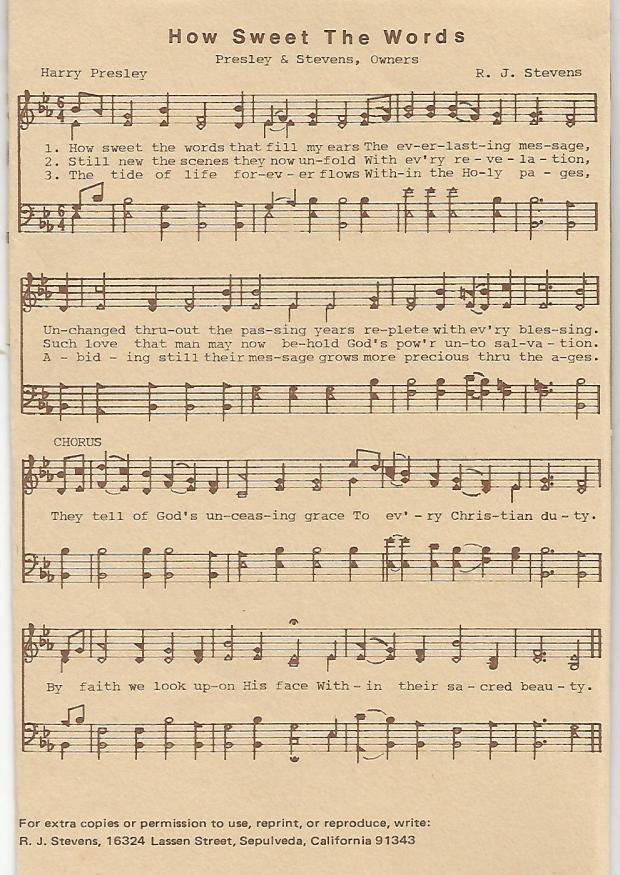 2 thoughts on “How Sweet the Words”